I’ve been hearing a lot about Chiang Mai in the press recently, as it has been towards the top of many a top ten, twenty or fifty list of travel destinations. As a long term resident of Chiang Mai this has meant I have been busy entertaining friends who, upon reading said list, suddenly remember where I live and want come for a visit.  It doesn’t matter that I have been singing Thailand’s and Chiang Mai’s praises for years, unless some #*#hole on Trip Advisor says it, it doesn’t count.  So many friends have come over the last year that I have it down to a bit of a science.

First of all, and this is very important, do not come to Chiang Mai between the end of February and the beginning of May. It’s burning season, which means the Chiang Mai Valley is covered in a thick blanket of fog that is not fog, it’s agricultural smoke. Just like “Foggy Old England” wasn’t foggy, it was polluted, so to, the glories of Chiang Mai are masked behind a gagging curtain of crap.  Again, this is very important, do not come during this time period.  Chiang Mai just sucks for a couple of months, really sucks, so much so that if you live here and you can leave you do. I usually escape to Bangkok for the fresh air. Yep, you heard me, Bangkok…fresh air. That’s how much it sucks.

Equally important! Completely disregard all of the above if you are planning on coming for the Songkran Festival in mid April. Songkran is the celebration of the Thai New Year and to be honest I don’t think I can adequately explain it. Like all truly worthwhile experiences it loses something in the telling, one must experience it for oneself. In short, it’s a four-day, citywide, water fight. No, water fight isn’t the right word; it is a water war. It is well worth the slightly elevated risk of lung cancer the burning brings, and this might just be wishful thinking, but I’ll be dammed if all that water flying around the air doesn’t clean it just a bit.

If a friend visits during this time no plan is needed, we do as is the way of the people and make merry in the streets with high powered water guns hanging from our brightly colored Songkran flower shirts. Now if a friend comes during a quieter time, our normal day goes something like this. First we breakfast at  Chiang Mai Breakfast Workd.  Yes this is a real place; it is run by a German man who like me realizes that while Thai food is one of the wonders of the world, their breakfast…not so much. If my visitors are dead set on only eating local food we will go over to Jok Sompet to eat, well Jok, which is a kind of rice porridge.  This place is a little controversial, as some of my Thai friends swear by it and others say it’s not authentic. As far Jok goes it tastes good to me.

After breakfast we hale a song tao for the obligatory trip up to WAT DOI SUTHEP. A song tao is a covered red pickup truck with two benches in the back and they can act as either a taxi or as a kind of communal bus.  Song is the Thai number two and tao is a type of bench. They are everywhere in Chiang Mai, and if you learn how to use them correctly you can get almost anywhere in the city for dirt cheap. The trip up to Wat Doi Suthep will be a bit pricier though.  Going to Wat Doi Suthep is probably the touristiest (is that a word?) thing you can do in Chiang Mai, but for good reason. It is a temple that sits on Mount Suthep overlooking Chiang Mai. Its golden stupa glimmers during the day and its lights burn beacon at night. On a clear day its views of Chiang Mai are spectacular.  All reason to put up with the flocks of brethren tourists you will most assuredly find there and the fact that it charges an entrance fee. A Buddhist temple with a fee, seems a bit at crossed purposes but what the hell do I know? 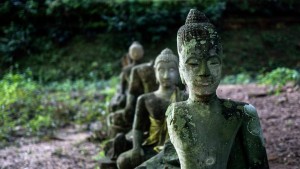 WAT UMONG, SERENITY IN THE FOREST

Another reason I take my visitors there is that it acts as a beautiful counter point to our next destination. Chiang Mai is a city of temples (Wat), they are everywhere. Here you describe where you live by the closest Wat rather than with street names. Wat Doi Suthep is the most famous, but in my mind the most sublime in Chiang Mai, and for that matter Thailand, is WAT UMONG . Where Wat Doi Suthep stands pronouncedly on a mountain, Wat Umong retreats contemplatively into the forest. 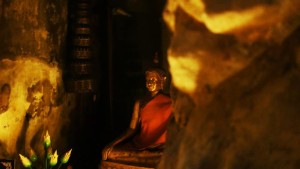 EXPLORE THE TUNNELS AT WAT UMONG

Though the area around it is building up quickly, it has so far managed to maintain its uniqueness. Umong means tunnel in Thai and the temple complex includes a group of tunnels that hold revered images of the Buddha.  In my mind, the act of seeking understanding and wisdom in the darkened tunnels of Wat Umong allegorizes wonderfully the advice of the Buddha to seek answers from deep within ourselves.  After we give ourselves a moment to let the grander questions quiet our racing minds, it’s time to eat again.

For lunch we jump back into the song tao and head to Suthep Road. It would be impossible for me to tell you where my favorite Isaan (north eastern region of Thailand) restaurant is, so I have included a Google map link. It is the restaurant with a whole bunch of grilling meat in front of it.  If you find it great, enjoy (if you do find it order Nam Tok, which means waterfall and prepare to cry). If not, do not despair Suthep Road boarders the university and has every form of street food known to Thailand. Pick one you like and jump in.

Lunch is usually followed by a bit of a lie down until evening.

Our Local Genie blog series are written by a city native and wholly their own opinion.  Local Genies tell us where they would take us if we popped in for a visit.  It’s a combination of top tourist sites and local treasures that will invite us to pack a bag and see for ourselves.

Ready to head to Chiang Mai?